More to the Mayan Riviera: Fly Southwest to Cozumel!

On Saturday, March 7, 2020, subject to government approvals, Southwest will begin twice-daily service roundtrip between Houston (Hobby) and Cozumel with one-way fares from Houston as low as $99 available for purchase today until 11:59 P.M. Pacific Time (see full terms and conditions below). Southwest has served the region for five years via Cancun International Airport, having grown to offer nonstop service in 2019 between 17 cities in the U.S. and Cancun.

“Scuba divers and beach fans long have wished to fly with us to enjoy this underwater paradise,” saidBill Tierney, Vice President of Marketing for Southwest. “We’ll bring the world-famous Hospitality and value of Southwest to Cozumel while bringing a new beach destination within reach for our Customers, just as we’ve done before with service to Cancun, Puerto Vallarta, Cabo San Lucas/Los Cabos, the Caribbean, and with our growing service for the Hawaiian Islands.”

The carrier is adding new daily service between Sacramento and Kahului, Maui, on March 7, 2020, and will also begin flying daily between:

“Demand is strong for our Hawaii service and we’re not just increasing those routes to daily service for our Customers, we’re also moving up our timeline on two routes set to begin in January, and instead will fly them this year,” said Adam Decaire, Vice President of Network Planning for Southwest. “Our flights betweenSacramento andHonolulu, as well as interisland service between Honolulu and Lihue, Kauai will now begin November 10, 2019.”

In celebration of new service among the Islands, Southwest is also offering interisland travel for as low as $29 one-way** from Nov. 12, 2019 through April 8, 2020. Fares are available today through 11:59 p.m. Pacific Daylight Time on Oct. 3, 2019. Travel on these fares is valid only on certain days of week and seats are limited. Blackout dates apply. Please see complete fare sale rules below.

Spring into a break with seasonal shortcuts

Also beginning March 7, 2020, the carrier will add seasonal service on Saturdays nonstop between Baltimore/Washington and Providenciales, Turks and Caicos, subject to governmental approvals.

Dedicated to Denver with More Service than Ever

This spring, Southwest will introduce new daily service between Denver and Des Moines, effective March 7, 2020, and grows an offering for Denver Customers based on travel demand. Additional flights on over 40 routes already served from Denver will give Customers more options throughout the day to reach their destinations. In March, the carrier will offer up to 235 departures a day to 65 cities nonstop, a record high for the Southwest operation at Denver International Airport

Fly Southwest between Atlanta and Memphis

In addition, this spring, the carrier is adding new service beginning March 7, 2020, linking Atlanta and Memphis. Southwest will offer two flights a day Sundays through Fridays and one flight a day on Saturdays between the two cities.

The new flights and the carriers’ full schedule of more than 4,300 flights a day are available for purchase now atSouthwest.com.


ABOUT SOUTHWEST AIRLINES CO.
In its 49th year of service, Dallas-based Southwest Airlines Co.(NYSE: LUV) continues to differentiate itself from other air carriers with exemplary Customer Service delivered by more than 59,000 Employees to a Customer base topping 130 million passengers annually. Southwest became the nation’s largest domestic air carrier in 2003 and maintains that ranking based on the U.S. Department of Transportation’s most recent reporting of domestic originating passengers boarded. In peak travel seasons, Southwest operates more than 4,000 weekday departures among a network of 101 destinations in the United States and 10 additional countries.
Southwest coined Transfarency® to describe its purposed philosophy of treating Customers honestly and fairly, and low fares actually staying low. Southwest is the only major U.S. airline to offer bags fly free® to everyone (first and second checked pieces of luggage, size and weight limits apply, some carriers offer free checked bags on select routes or in qualified circumstances), and there are no change fees, though fare differences might apply.
Southwest is one of the most honored airlines in the world, known for a triple bottom line approach that contributes to the carrier's performance and productivity, the importance of its People and the communities they serve, and an overall commitment to efficiency and the planet. Learn more about how the carrier gives back to communities across the world by visiting Southwest.com/citizenship.
Book Southwest Airlines' low fares online at Southwest Airlines or by phone at 800-I-FLY-SWA. 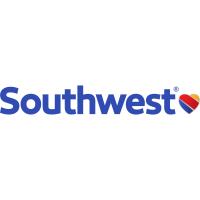